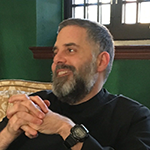 Our efforts cultivating the fruit of the earth were modest at best, because growing up in Brooklyn meant not have having much gardening space. In our backyard, we had a few small rectangles of soil in which to plant our hopes for fresh vegetables and herbs. We experimented with everything from eggplants to pumpkins, but what I remember most is the tomato plants tended by my father and grandfather, taller than me at the time and filled with beautiful ripe tomatoes. That such a prodigious crop could come from so tiny a handful of seeds never ceased to amaze me. And after we had planted the seeds for next season, I waited with a mixture of hope and awe for what seemed like a miracle, new tomato plants rising from the ground in which the seeds were buried.

Nowadays, many of us who live in cities don’t consider anything about our food very miraculous, and we probably aren’t familiar with placing all our faith in a seed. But the lives of our ancestors, certainly in Jesus’ time, were intimately woven with nature’s cycles of death and new life. The fruit of each plant gives its life for the rich potential of its seeds, and each seed itself must die so to bring forth new growth.

By this recognition of these natural processes of death, transformation, and rebirth, the simple act of burying a seed becomes holy and sacramental. It’s why in our history we have so many rituals and celebrations tied to the rhythms of nature. Each year passes away to make way for a new one, and the death of each season is the beginning of the next. Wind and rain, snow and mist, they come and go with the ever-shifting patterns of the weather. The moon has its cycle, too, being buried in darkness every 30 days before offering us its waxing beauty once more. And the sun leaves us each night before rising again to welcome us with a new dawn of hope and possibility.

I can’t help but wonder if any of this was on the minds of Nicodemus and Joseph of Arimathea as they prepared Jesus for entombment and buried him. What little we know of Joseph is that he was a disciple of Jesus, though a secret one out of fear. We learn he was a very prosperous member of the council. And the tomb into which Joseph and Nicodemus lay Jesus is in fact Joseph’s own tomb, newly dug.

As for Nicodemus, we know of his secret meeting at night with Jesus where he, a Pharisee and leader in his community, expresses his desire for the Kingdom of God. Unfortunately, it seems as though Nicodemus is only confused when Jesus tells him that one needs to be born again from above, born from water and spirit to enter God’s Kingdom. But, there well might have been some subtle stirrings in Nicodemus’ heart, because later, we see Nicodemus defending Jesus from attacks by his fellow Pharisees and high priests, a bold and courageous act given the circumstances, much like Joseph’s demand of Pilate for Jesus’ body.

We’re not told how these two meet, although we might assume it had something to do with the elite social circles they traveled in. We also don’t know how they came to know each other as followers of Jesus. So, it’s certainly possible for them to have met each other for the first time under the shadow of the cross. One thing is clear, though: at this point in their journey Joseph’s discipleship seems no longer a secret, and Nicodemus is coming to Jesus not by night, but in the bright light of the sun.

Something has changed for them, they have faith in Jesus and trust his message, that he and his heavenly Father are one and that the Kingdom of God is very near. This faith gives them courage to overcome their fear, and it gives them the hope that by burying Jesus something new and beautiful will be born, and it will change their lives forever.

For us, on this Good Friday, we remember Jesus’ suffering, death and burial, set against the backdrop of his life, teachings, and resurrection. And more than that, we each enter into the paschal mystery as it unfolds for us now, inviting us to deepen our understanding of this Easter story as it bears the fruit of God’s loving Spirit in our hearts.

Like Joseph of Arimathea we offer our very own tomb, the tomb of hearts, for Jesus. We plant our hope there as well, a priceless and very extravagant hope like Nicodemus’ offering of spices, the hope of sharing in the resurrection of Christ. We hope to die with Jesus and rise as new creations in Christ, no longer living out of our own willfulness, but being willing conduits for the will of our Beloved Holy One.

But the danger is that our hope may be overcome by fear. The fear of surrendering all we have and all we are to be buried with Jesus can feel overwhelming. And so, we must learn to trust that Christ is with us always on this journey, so in truth we have nothing to fear. The seasons don’t fear death, nor does the wind, the sun, or the rain. The moon doesn’t fear falling into darkness, nor does the caterpillar fear its cocoon. The dew on a blade of grass has no fear as it’s given wings by the warmth of the morning sun. We can be like they are, and have no fear.

So instead of succumbing to fear we pray. We pray for faith grounded in the very ancient cycles of life, death, transformation, and rebirth that Jesus so perfectly modelled for us as the incarnate Word. It’s the kind of faith we might have in the miracle hidden within a tiny seed, whose death produces such beautiful new fruit. We pray that as we let ourselves surrender to God’s compassionate and loving embrace, this perfect love casts out our fear, allowing our own burial with Jesus in the tomb of our heart, joining Jesus in his death, and joining one another in our extravagant hope for resurrection into God’s Eternal Kingdom. Amen.