I presume there are a few of you in the congregation who like me had the experience of growing up an only child. I certainly can attest to the advantages of being an ‘only’ through my observances of family and friends who did not share my experience.  For instance, unlike my cousin, I did not have a younger sister who liked to pull my hair or inform my parents of my every move.  Unlike my best friend in elementary school, I did not have to wear the ‘hand-me-downs’ from an older sibling.  And, contrary to the experience of a college friend, I did not have to live up to the standard set by more virtuous siblings who seemed to do no wrong. I definitely considered these advantages.  Yet, even though I enjoyed being an ‘only,’ I did experience some jealousy of my friends with siblings.  My mom liked to tell the story of the time when I was 7 or 8 years old when I came to my parents who were sharing a conversation in the kitchen and asked if I could have an older brother!  My dad, probably a little amused but letting me down gently said, “I don’t think things work like that, son.”  Being resourceful, I had a follow-up question prepared.  “Could we adopt one?”  Obviously, knowing now how things turned out, they did not work that way either.  As I think back to that story from my youth, I wonder what was behind my desire for an older brother?

This evening’s reflection is the first in a three-part series entitled “Lord Jesus, Come Soon,” in which we explore the great ‘O Antiphons’ of the season of Advent.  On the last seven days before Christmas, this group of antiphons book-end the Magnificat (The Song of Mary) which is sung every evening at Evensong.  Each of them refer to Jesus using an attribute associated with this long awaited Messiah: Emmanuel, Rex gentium, Oriens, Clavis David, Radix Jesse, Adonai, and Sapentia; translated:  Emmanuel (meaning “God with us”), King of the Nations, Morning Star, Key of David, Root of Jesse, Lord, and Wisdom.  When arranged in a particular order they form a Latin acrostic:  Ero cras, which translated means, “Tomorrow, I will come.”  This evening we will explore Jesus as ‘Wisdom.’  The text of the antiphon is:

O Wisdom,
You came forth from the mouth of the Most High,
and reach from one end to the other,
mightily and sweetly ordering all things:
Come and teach us the way of prudence.

In this antiphon, we hear words echoing back to our first lesson from the Wisdom of Solomon, giving us poetic shades of the attributes of Wisdom and alluding to its personification:  She reaches mightily from one end of the earth to the other, and she orders all things well.  For the Israelite the wisdom sentence like any utterance of “the Word,” had power and being in itself.  As the prophetic word not only expressed God’s intent but also was a power in bringing it about, so the wisdom sentence had its own almost material existence.[i]   Give me the wisdom that sits by your throne, and do not reject me from among your servants. With you is wisdom, she who knows your works and was present when you made the world; she understands what is pleasing in your sight and what is right according to your commandments.  Send her forth from the holy heavens, and from the throne of your glory send her, that she may labor at my side, and that I may learn what is pleasing to you.

In our lesson from 1 Corinthians this evening, we hear Paul identify Wisdom as Jesus Christ.  We know that in Jesus’ own day, he was looked at with suspicion because he was a poor itinerant rabbi of questionable lineage.  Those with impressive knowledge and impeccable educations were always testing him and saw him as a nuisance and a distraction.  He was not the epitome of a Messiah who was expected to overthrow the power of Rome!  But as we read through the gospels we come to understand that Jesus’ mission was not for the restoration of Israel as an empire, but rather for the restoration of the Kingdom of God, which is to say, the relationship between God and his beloved creation.  Paul writes: But God chose what is foolish in the world to shame the wise. He is the source of your life in Christ Jesus, who became for us wisdom from God, and righteousness and sanctification and redemption, in order that, as it is written, ‘Let the one who boasts, boast in the Lord.’

And both for those who lived in first-century Palestine as well as for us today, this is quite counter-cultural.  We live in a society that promotes the self as well as the virtue of the ‘self-made man.’  We learn from an early age that our worth is based on our accomplishments and what we accumulate whether it be material goods or accolades for our intellect. We operate in society of caste where your friends and colleagues define you more than your God-given humanity. Most people when talking about themselves would not talk to you about their poverty.  To do so would be like admitting our failures.  We live in a dark time where people cannot afford health care and food for the table because they do not make a living wage.  The leaders of the world seem to be touting nationalism and self-interest instead of the common care of our world and the just stewardship of creation.  We are increasingly promoting the lie that if we can save ourselves by pulling ourselves up by our own bootstraps.

When we as Christians pray for Jesus to come again soon we are admitting a truth that flies in the face of our cultural dependence of self –reliance and admit that we have no ability to enact our own salvation.  In her new book Advent: The Once and Future Coming of Christ, Episcopal priest and theologian Fleming Rutledge points that the message of the Advent season is the acknowledgment of the deep darkness around us and need of Jesus as a savior.  She writes:  “This is precisely the Advent situation:  doom on the one hand, deliverance on the other.  When the prophet Isaiah cries out, “O that thou wouldst rend the heavens and come down!”, it is with just such a sense of desperate knowledge that nothing short of divine intervention can arrest the ever-recurring cycle of human misery.”[ii]

I think this is something I have experienced many times in my life and just may have begun with my request for an older brother. I remember my parents not having a happy marriage and that caused our family a good deal of pain, which I could not remedy.  I recall being bullied a lot as a kid because of certain interests I had that were different than those of my classmates.  I had difficulty in school because of a learning disorder that was not diagnosed until my adulthood.  I knew at a very young age that I needed help from someone, perhaps not too much older than me, yet was a few steps ahead giving me a heads up, coaching me, or even just being a companion through the difficult times.

I actually think that this is our real impulse, to ask for help, rather than the learned behavior of self-help.  When it comes down to it, none of us are ‘self-made’ people.  We did not choose to come into the world on our own.  We did not choose our families of origin, our ethnicity, or our sexuality. While we were born with intelligence and with the capacity for learning, we did not arrive fully assembled nor did we come with instructions.  The only instinct we had in the beginning once our lungs were clear was to cry out for help as loudly as we could.  In our gospel lesson from Luke we hear Jesus say:  ‘I thank you, Father, Lord of heaven and earth, because you have hidden these things from the wise and the intelligent and have revealed them to infants; yes, Father, for such was your gracious will.

I’ve always been quite moved by 12-step recovery work that is prevalent in organizations such as Alcoholics Anonymous. For me the first three steps of recovery actually are the entry point into the Wisdom of God as well as the acknowledgement of your own God given dignity.  The steps begin with the admission of helplessness and that our lives had become unmanageable, the belief that a Higher Power could restore us to sanity, and after that the turning over of our will and lives to the care of the God of our understanding.  This is at the crux of the true Wisdom, that God is gracious and desires for us to be whole and exactly whom he has created us to be.  Theologian Stephen Farris writes:  “If knowing God were a matter of figuring things out, then it would make sense that the wise and intelligent would know God.  Rather, it is those who are dependent on the graciousness of God, the metaphorical infants, who in their openness are the recipients of divine revelation.  In these words is a reminder that the posture necessary for success is the one open to the action and revelation of God’s graciousness.”[iii]

This is what is means to ask Jesus, our true Wisdom to come soon and teach the way to prudence:  which is the right and just ordering of our lives, acknowledging ourselves as children of God, spoken into being and who have a place in the sweetly ordered creation.  Lord Jesus, our life and Wisdom, come soon! 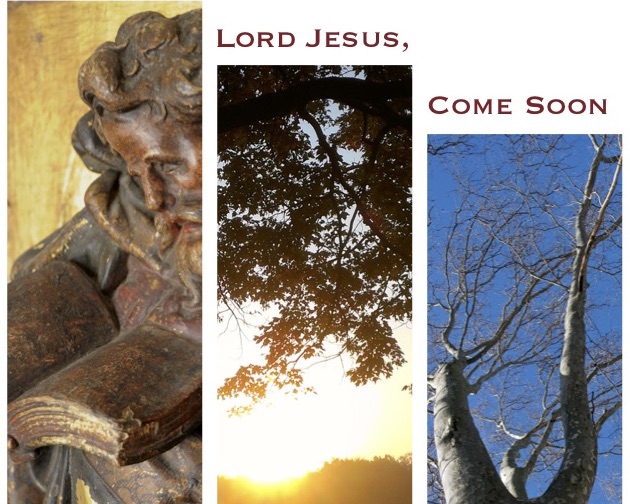 [ii]Rutledge, Fleming. Advent: the Once and Future Coming of Jesus Christ. William B. Eerdmans Publishing Company, 2018.