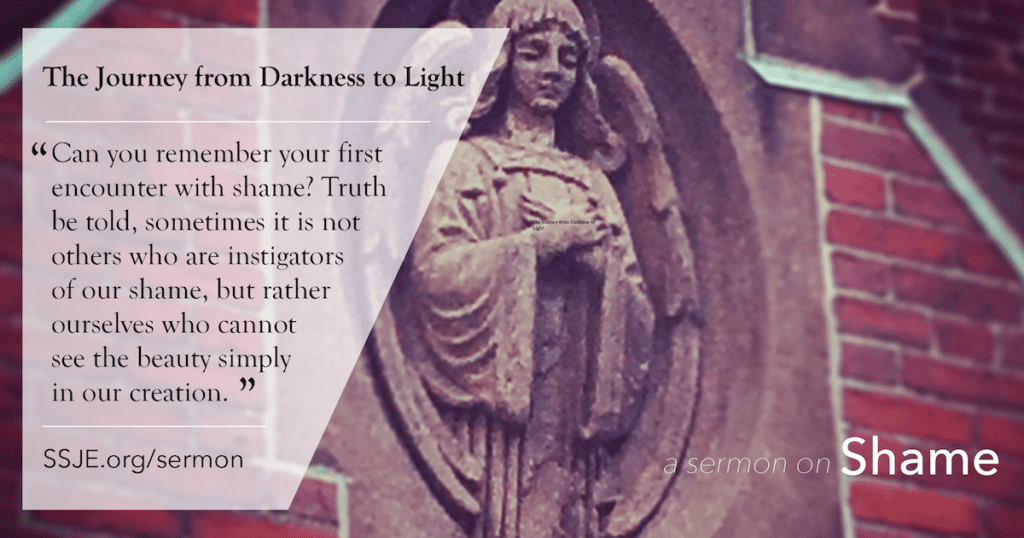 When praying with our scriptures appointed for this evening, one word kept grabbing my attention and has stayed with me now for several days.  It is something that I have spent a lifetime trying to evade but continues to show up and rear its head at me no matter how much I try to control it, manipulate it, and cover it up.  I have a personal and intimate knowledge of it, yet I know it to be a pervasive reality in all of humanity and I suspect that every one of us here has an intimate knowledge of this word.  The word is:  shame.

From the beginning of the canon of scripture, it only takes three chapters for shame to appear in the human condition.  The last sentence of Genesis chapter two reads:  “And the man and his wife were both naked, and were not ashamed.”  In the course of chapter three we read that Adam and Eve act on their temptation to do the one thing their creator has told them they must not do, eat the fruit of the Tree of Knowledge of Good and Evil.  Their eyes are opened and they hide themselves.  When God moves through the garden and cannot find them he calls out to them, “Where are you?”  The man answers, “I heard the sound of you in the garden, and I was afraid, because I was naked; and I hid myself.” And from that moment, shame enters the human condition and continues to show up continually throughout our existence. END_OF_DOCUMENT_TOKEN_TO_BE_REPLACED

“Unless a grain of wheat falls into the earth and dies, it remains just a single grain; but if it dies, it yields a rich harvest.”[1]

This one phrase from John’s Gospel encapsulates the essential sprit of what we call the Paschal Mystery – Christ’s Passion, Death, and Resurrection to New Life. On this Tuesday evening in Holy Week, these words are also something like a “preview of coming attractions,” awakening our hopes and grounding our intentions as we prepare for the single, liturgical arc of Maundy Thursday, Good Friday, Holy Saturday, and the Great Vigil of Easter.

We believe that our sincere and wholehearted participation in this liturgical drama is one of the central means by which we participate in the saving work of Christ. This is the unfolding drama of how, in his own particular life and flesh, Jesus underwent the human experiences of suffering and death and was, in defiance of all expectation, raised from death by the One he called Father. As a liturgical tradition, we do not simply re-enact or reminisce about very significant events that happened long ago in ancient Palestine. No. To see what we are doing as pious commemoration would be to keep the Crucified at a safe distance in the historical past, separate from ourselves. Rather, the unboundaried space opened to us as the assembled body of Christ invites us truly to enter the sacred, inner dynamic of the events by which we have been claimed and marked as His own forever. On a personal level, this week invites us into a more intimate, transformative encounter with the mystery of our own suffering, death, and resurrection. Each of us has undergone, and will yet undergo, countless passions, deaths, and resurrections – in churches, yes, but also in hospitals and office buildings, by bedsides and firesides, under the open sky and around kitchen tables. Though these experiences are potential fountainheads of meaning through our union with Christ, many of them go unnamed as such and so their graces remain unrealized. In the chapter from our own Rule entitled “Holy Death,” we receive this reminder: “Week by week, we are to accept every experience which requires us to let go as an opportunity for Christ to bring us through death into life.”[2] This is the paschal mystery writ small, in lowercase letters, across the individual history of every child of God. The small mystery enclosed within one’s own skin is grounded afresh in the Great Mystery of Christ’s Body by reading our small print alongside the bold, capital letters of this week’s unitive liturgical action. END_OF_DOCUMENT_TOKEN_TO_BE_REPLACED

I’ll tell you a secret about me. Maybe those of you who have listened to me over the years can guess what it might be, but maybe not. It is not some earth shattering secret. I am not about to tell you some deep dark secret from my past. Rather it is about the way I approach scripture, and increasingly the way I approach life.  END_OF_DOCUMENT_TOKEN_TO_BE_REPLACED

Tuesday in Holy Week is a kind of non-event.  But we’re here anyway, because this is what we do every Tuesday at 5:30 (and today being a first Tuesday of the month, we have soup following the service).  Monday, Tuesday and Wednesday this week are like the eye of the hurricane: a return to calm after the traumatic events of Palm Sunday and before the drama that begins to unfold on Maundy Thursday. We’re in pause, with two days distance from the visceral events of Sunday, and two days distance from the earth-shaking events that begin to unfold on Thursday–so perhaps this evening we can ponder things in a more reflective way.

The scriptures we hear this evening strike a note of universalism. Universalism in the sense that God is concerned with all of humanity, not just certain tribes.  “It is too light a thing that you should be my servant to raise up the tribes of Jacob and to restore the survivors of Israel; I will give you as a light to the nations, that my salvation may reach to the ends of the earth.” [Isaiah 49:6]  In 1 Corinthians, Paul proclaims Christ crucified to all people: Jews, Greeks and all the other Gentiles.  And Jesus himself in John 12:32: “And I, when I am lifted up from the earth, will draw all people to myself.” END_OF_DOCUMENT_TOKEN_TO_BE_REPLACED

As Holy Week gets underway we have the sensation that something large, something very large, has been set in motion. And that there’s no stopping it. Even though we know how it all turns out—sort of—there’s a sense of both largeness and inevitability. So there’s nothing to do but to go with it. Nothing to do but to allow ourselves to be swept up in this enormous wave–again.

How large is the largeness of Holy Week? We just heard in this passage from John that when he is lifted up he will draw all people to himself. “All people” is pretty large. But a variation in some of the ancient texts suggests something even larger. When I am lifted up I will draw all things, everything, the whole shebang, to myself. An exponential leap from all people to all things, the whole creation, the whole cosmos. What happens in Holy Week and Easter gathers up the entire cosmos in its energies.

It’s hard to know exactly what Paul had in mind, but his understanding of the life, death and resurrection of Jesus is cosmic in scope. Something that pertains to the whole cosmos is happening in the death and resurrection of Christ: animal, vegetable and mineral; earth, air, fire and water. From the depths of inner worlds to the furthest reaches of outer space. “Behold, I am making all things new”—not just all people, but all things, he says. Whether we quite comprehend this or not, the scope is breathtaking.

Yet the high drama, the cosmic drama of this week is experienced in very intimate things. A son and a father share an agonized conversation in a garden. Friends share supper for the last time. A foot is washed, then another. Clothing is removed to shame a victim. Flesh is pierced—the piercing of flesh is a terribly intimate thing. A mother anguishes as she awaits the last breath of a first born son. All terribly intimate moments.

Yet, all the while as these very intimate things take place, the cosmos, the planets and solar systems and galaxies swirl on their way. Its always like this, of course. Galaxies swirl even as we have our own agonized conversations, even as we share suppers for the last time, even as our own flesh, our own souls are pierced. And its all of a piece.

But its best not to jump ahead. For the moment, better to be swept up in this great wave and let him take us where he will.