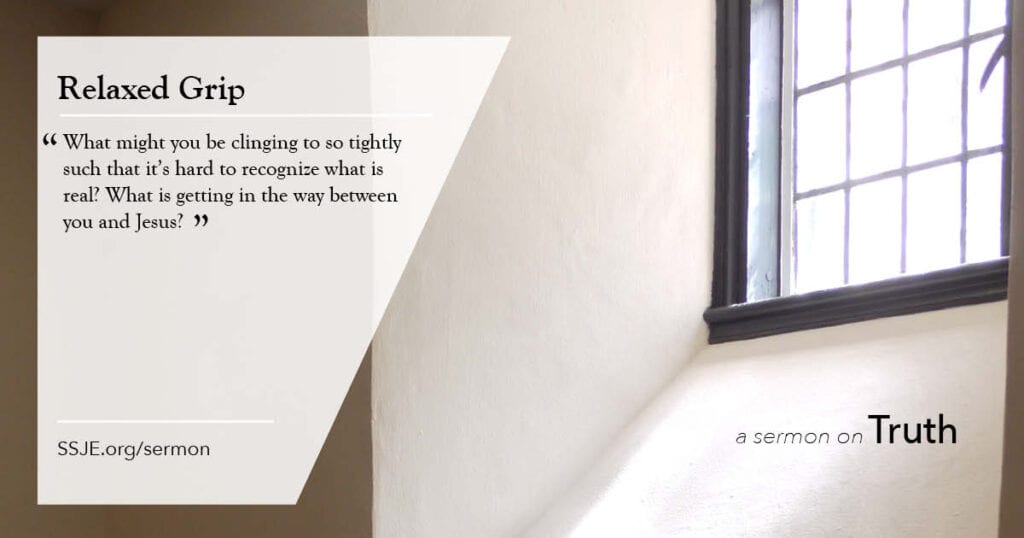 “Are you greater than our father Abraham?” They were confused and upset. How could those who kept his word not see death? They clung to what they knew and could not hear or see something more. They clung so tightly to being Abraham’s children, that they missed really seeing Jesus.

What might you be clinging to so tightly such that it’s hard to recognize what is real? What is getting in the way between you and Jesus?

Perhaps it’s who we are or what we have: heritage, group-identity, connections. Perhaps it’s the people we love or who love us best, our meaningful relationships. Perhaps it’s comfort or privilege, standard of living, status or success. Perhaps it’s abilities, gifts, how we serve, what we do well—including for God.   END_OF_DOCUMENT_TOKEN_TO_BE_REPLACED

The last line of this Gospel lesson appointed for today captures my imagination:  Jesus said what was to be said, and then “Jesus hid himself…”  And it was a good thing he did.  What if Jesus is hiding himself from you now, and it’s for your own good?  You may be at a point in life when you are unclear about the future: what decision you should make, what direction you should take, what the outcome to such-and-such will be.  You don’t know.  And you may find yourself searching for an answer, maybe anxiously wondering what you should do, or what will happen?  You don’t know.  And you may desperately want to know. END_OF_DOCUMENT_TOKEN_TO_BE_REPLACED

“Are you greater than our father Abraham?” Though they believe him, these Jews find Jesus baffling. What gets in the way is that they cling so tightly to their identity as Abraham’s children. Though we believe, Jesus baffles us too. Much gets in the way as Jesus keeps inviting us into more.

What is Abraham for you, an identity or feeling to which you cling so tightly that it blocks everything else? What is getting in the way between you and Jesus?

Perhaps it’s heritage or connection or networks. Perhaps it’s the people we love or who love us best, meaningful relationships. Perhaps it’s comfort or privilege, standard of living, status or success. Perhaps it’s abilities, gifts, how we serve, what we do well. END_OF_DOCUMENT_TOKEN_TO_BE_REPLACED

Posted in Sermon and tagged John 8:51-59
Leave a comment

51Very truly, I tell you, whoever keeps my word will never see death.’ 52The Jews said to him, ‘Now we know that you have a demon. Abraham died, and so did the prophets; yet you say, “Whoever keeps my word will never taste death.” 53Are you greater than our father Abraham, who died? The prophets also died. Who do you claim to be?’ 54Jesus answered, ‘If I glorify myself, my glory is nothing. It is my Father who glorifies me, he of whom you say, “He is our God”, 55though you do not know him. But I know him; if I were to say that I do not know him, I would be a liar like you. But I do know him and I keep his word. 56Your ancestor Abraham rejoiced that he would see my day; he saw it and was glad.’ 57Then the Jews said to him, ‘You are not yet fifty years old, and have you seen Abraham?’* 58Jesus said to them, ‘Very truly, I tell you, before Abraham was, I am.’ 59So they picked up stones to throw at him, but Jesus hid himself and went out of the temple.

Several years ago, the author Bruce Filer produced a book entitled Abraham, about the three Abrahamic faiths: Judaism, Christianity, and Islam.  The book soared to the New York Times Bestseller List for more than six months.[i] Abraham is a very important name today, as it was in Jesus’ own time.  For Jesus to claim what we hear in this gospel passage – “before Abraham was, I am” – was two strikes (or we might say, two stones [sic]) against him: it sounded both preposterous and blasphemous.  Preposterous because it was through Abraham that a nation had been formed and God’s everlasting promises were made  many centuries prior to Jesus.  Everyone knew that.  Jesus is a nobody from Nazareth.  “Can anything good come from Nazareth?” they used to say.[ii] Jesus is preposterous.  Secondly, Jesus’ saying, “before Abraham was, I am,” seemed blasphemous because this sounded very much like the conversation Moses had with God, recorded in the Book of Exodus, who identifies himself as “I am.”[iii] The Hebrew actually translates, “I will be who I will be,” nevertheless Jesus’ saying “before Abraham was I am” was too close for comfort.[iv] The crowd was prepared to stone him, they thought quite justifiably. END_OF_DOCUMENT_TOKEN_TO_BE_REPLACED